They wouldn't have even looked at you

The focus of the Trusted Trophy Tour's visit to Clyde FC at Broadwood was the mental health programme which is run in partnership with NHS Lanarkshire.

Launched in the second half of 2016, the programme looks to support people who suffer from mental illness and addictions by helping them using football.

Since being formed, it has grown rapidly to the extent that the group are now part of a league and go by the name, Clyde United.

Tom Elliott, Community Development Manager at the Clyde FC Community Foundation explains: "The programme was established about eight or nine months ago working with Martin Tobin from the NHS.

"We came up with a basic football programme that was aimed at mental health issues and addictions and it has grown from there over the last few months. The guys come in once a week and it's very basic; it's football. We get them out and active and that's really it.

"This programme is about them coming in and moving on. Some of them now volunteer with us on a matchday and quite a few of them are going through their SFA Level One coaching certificate.

"We're looking at there being a pathway for Clyde United participants. Our vision is using the unique power football has to deliver key messages and that is run all through our foundation programmes."

One unique aspect of the programme that was on show on the day was the use of bikes. Following a programme called Carbon Clyde which ran last year focusing on cycling, the club had a number of bikes and wanted to put them to good use.

Five or six months ago they wouldn't even have looked at you.

The Clyde United team were offered the chance to use them and it has become a favourite part of the weekly sessions.

"This started out of an identified need for a football group to support men to achieve wellness and health in the Cumbernauld area, especially mental health and addictions," he said.

"This group has grown like a rocket over the last six or seven months.

"You can see by looking at these boys how good an impact it's had. Five or six months ago they wouldn't even have looked at you.

"These are people that because of the nature of their illness they were withdrawn and now they're healthy, they're doing fitness and they're volunteering here in the club and at New College Lanarkshire. It's had an unbelievable impact."

As well as getting the chance to have their photo taken with the SPFL trophies, the programme participants also got a chance to meet and have their picture taken with current Clyde co-manager, Jon-Paul McGovern.

Speaking about the Tour's visit to Clyde community foundation chair John McKinnon, added: "Today is an excellent event. The Clyde United boys are just loving it.

"They're up close and personal to the silverware and we're very thankful to the SPFL for that. As you can see from the guys it's an exciting day for them. We'll count the trophies in and out to make sure none stay here at Clyde!"

Our visit to Broadwood Stadium in Cumbernauld will see us profile Clyde FC's Clyde United. This programme is designed to support those with poor mental health get active with football coaching, structured league matches, cycle training, and an overall physical fitness programme.

The project, led by Clyde FC Community Foundation and in partnership with NHS Lanarkshire has seen the team join the Scottish FA's Disability League. It is designed to support people with poor mental health by providing structured programme of activity and engagement around physical health. 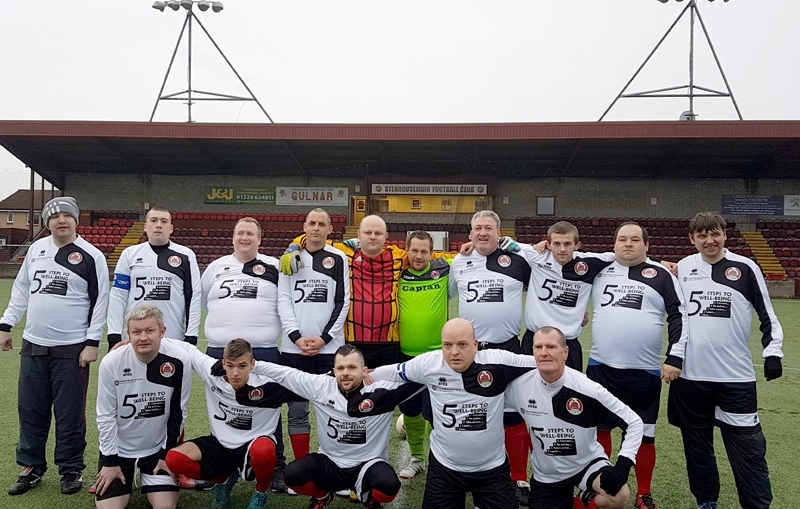 NHS clinical healthcare nurse support worker Martin Tobin says, "We are delighted with the progress made since Clyde FC Community Foundation said they would help set up a football team and give us the opportunity to train using the fantastic facilities at Broadwood.

"Football is a great way to help people recover from or cope better with mental health issues."