Big buzz about the Blues

Of course it's not every day the Scottish Premiership and League Cup trophies tour the country.

So when they arrived in Stranraer there was a real buzz, as four local primary schools helped showcase and celebrate Stranraer FC's Community School and Nursery Engagement Programme.

The Community Trust's Allan Jenkins - himself a former player for The Blues - was joined by staff and volunteers to congratulate young players from all teams to receive medals.

And of course there were plenty of photographs and selfies of the trophies; with pupils from Stranraer Academy, where the festival was held, also encouraged to get in on the action.

Allan's meticulous approach very much mirrored the club's philosophy to how football at a grassroots level is developing. There was plenty of fun and laughter supported through strong community involvement, resulting in a growing healthy enjoyment of the game for boys and girls alike.

Rephad Primary School, for example, is situated in the east end of the town with its catchment also covering outlying areas such as Cairnryan village.

Depute head Moira Baird said: "We have two teams participating on the pitch. The children started working with Allan in school-time, and as the year's gone on the sessions and the kids have thrived.

"We now do after-school as well as, with all activities built into the curriculum. This is supported by the experience of people like our Active Schools Co-ordinator Laura McClymont. There's a lot of joined up thinking with good parental support."

There's a lot of joined up thinking with good parental support.

One such volunteer coach providing support and instruction from pitch side was parent Dawn Heaney.

"I'm lucky that I've got some flexibility with my time so I help out when I can," she said.

"It's great the kids have the 3G pitch available to them. They'll play against each other today then at the weekend they'll meet up to play for Millennium FC, which really supports grassroots football around here."

"The girls game in and around Stranraer is also booming," he said. "There's a real infection of enthusiasm from local coaches.

"And with the girls under 13s youth league now established, also supported by Millennium FC, there's a pathway to the club from what Allan is doing with schools.

"The women's senior team qualifying for the Women's Euro finals in Holland this summer will hopefully also act as catalyst for the game locally.

"Good work through local authorities and participation centres complements the good work in schools. We're really developing a love of the game."

Around 1,100 children from 19 local schools have benefitted from football sessions focusing on the importance of health, wellbeing and a fit & active lifestyle. 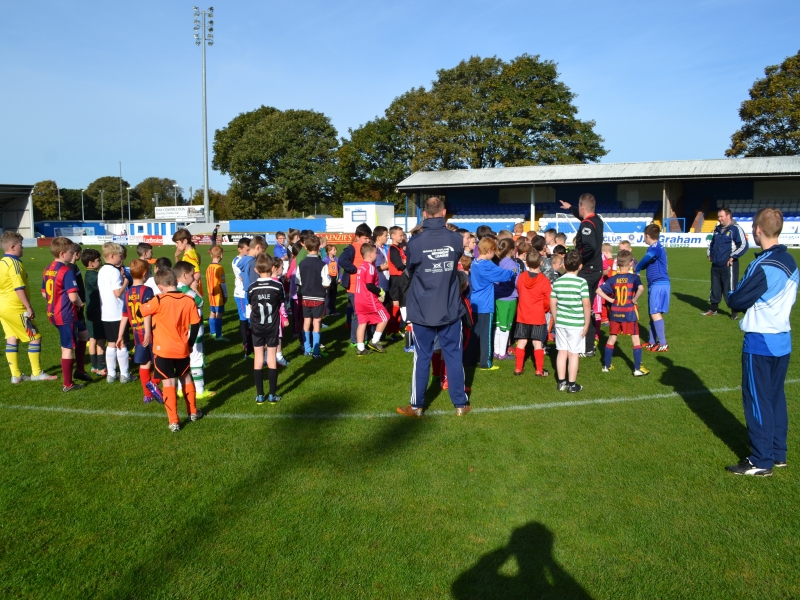 Sessions also provide a focus on numeracy and literacy through simple football games and activities.

Every school involved has been invited to send a group of children to participate, and around 150 are expected to attend.